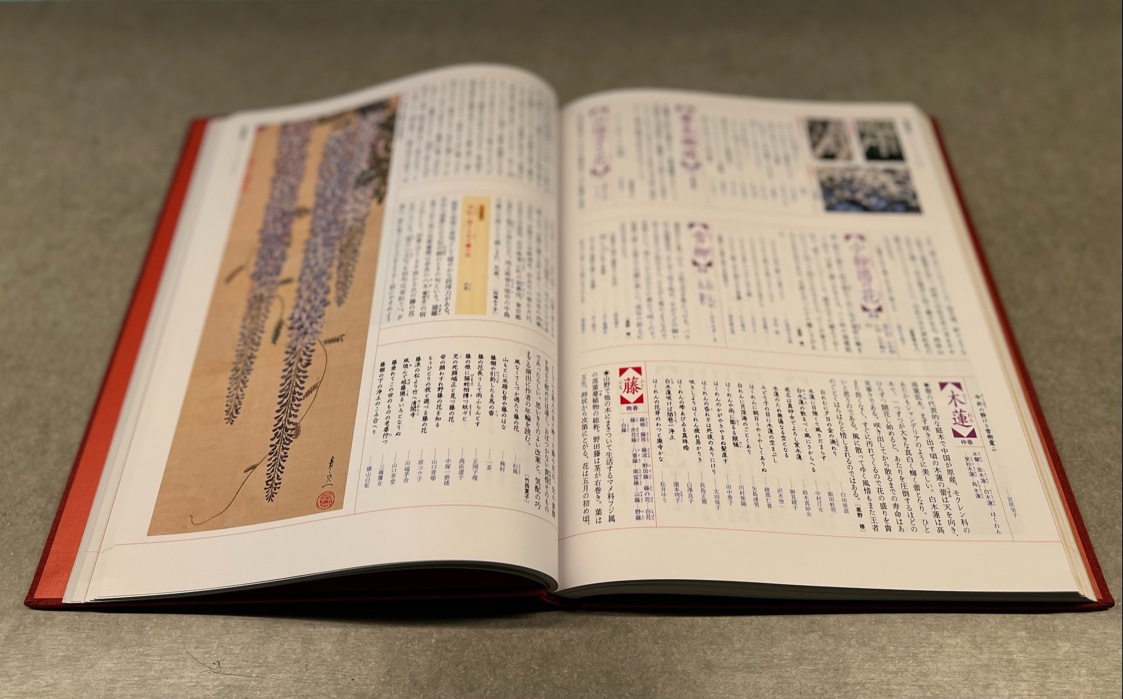 I went for a long walk yesterday and when I got back a very heavy box was sitting at the foot of our mailbox. I assumed it must be for Anthony. Some new rocks for his aquariums?  But then I saw the label from Yaguchi Shoten, a used bookstore in Tokyo’s Jinbochō district, and realized it was the gorgeous new encyclopedia of haiku seasonal words, called a “saijiki” in Japanese, that I had ordered and was anxiously awaiting.

The Shin Nihon daisaijiki, color edition, was published by Kōdansha just before the turn of the millennium.  It has five volumes, one for each season and one for the New Year. In total, it has entries on 4,200 seasonal words and 30,000 “example poems” (例句) in which these words appear. The boxes and boards are extremely thick and the books are very heavy, which meant it cost an obscene amount to ship them here, but it was still cheaper than buying it new.  The volumes are about a foot tall. Not too thick individually, but all five stacked together come to about six inches.  I stood at our kitchen island and opened the spring volume, running my fingers across the cool, smooth pages. To say that it is “lavishly illustrated” would be an understatement.  It is excessively, gaudily colorful in a Japanese sort of way, the pages crowded with highly saturated photos of flowers, plants, landscapes, birds, Edo-period woodblock prints mingled with modern paintings in the Nihonga style. Ikeda Yoson (1895-1988)’s gorgeously green painting “Kawazu” illustrates the entry for “frog,” which has no fewer than fifty-three poems using the word “frog,” starting with this funny one by Matsunaga Teitoku (1571-1654) :

Ashi no ha ni noru ya kaeru no funa-ikusa

I was surprised to see that this very old poem uses the vernacular form “kaeru,’ rather than the more elegant classical word for frog, “kawazu.” But next up on the list of 53 poems is Basho’s frog poem, too famous to quote, which reverts to “kawazu.”

Interspersed among the entries are “appreciations,”:  exquisite close readings of “famous poems” (名句) written by contemporary haiku poets and scholars.  These are all indexed in the back by the first line of the poems they discuss, so you can easily browse them. That’s one of many ways to read the saijiki.

I was delighted to run across an entry written by Fukumoto Ichirō, the preeiminent scholar of Shiki in Japan, whom I know well and who just finished guiding me and my good friend Nanae Tamura in composing a linked verse poem over email.  The other day, reading Yamamoto Kenkichi’s 500 essential kigo, another smaller saijiki, I smiled when Yamamoto mentioned a conversation with my professor Donald Keene about butterflies and moths. Surely one measure of success as a scholar of Japanese literature is to have your name appear in the saijiki!

Each volume has a dozen or so “columns” on various topics of interest to haiku poets: “fireworks,” “the cries of insects,” “thoughts on the seven grasses of autumn,” and “migrating birds,” to name a few. You can also find half a dozen essays in each volume in which famous poets share “my haiku technique.” Standing at our kitchen island, I read one by Fujita Shōshi (1926-2005), whose fantastic book Haiku in Twenty Weeks I am working my way through now.  Fujita talks about the importance of rhythm in haiku, how his teacher Mizuhara Shūōshi (1892-1981) drummed it into him until he came to feel it in his body. Mizuhara called this rhythm haiku’s “shirabe,” meaning “melody,” or “tune.” In the essay, Shōshi shares one of his especially rhythmical, and utterly untranslatable poems. He explains that he had long wanted to write a haiku about waterstriders. He liked  the way they make radiating circles as they traverse the surface of a pond. But he couldn’t capture the feeling of it until one day, as he watched rain drops fall onto a pond, the image came to him of the circles sent out by the waterstriders syncopating with those radiating from the raindrops. The juxtaposition was surprising and kept returning to his mind over the next three days.  As he repeated the words for water striders and rain:  “amenbō” and “ame,”  the poem took shape:

The poem reenacts the surprise the poet experiences each time he casts his eye over the pond’s surface and says to himself, “Hey wait! It’s not just water striders on the surface of the water, but also rain. Water striders, and raindrops too…” The poem has only sixteen syllables, but Fujita explains that the halting rhythm of the words makes you insert a mora-s worth of pauses to make it feel like the full seventeen. It’s a poem, he says, that came to him only after fifty years of writing and repeating to himself that haiku are about rhythm, rhythm, rhythm.

This saijiki also has gorgeous charts showing when various species of flowers bloom, when fish are freshest, and when birds migrate in different parts of Japan, as well as lists of festivals and detailed charts of the seventy-two micro seasons into which haiku poets divide the year.

At the back of the book there is a list of Japanese writers ordered by the days on which they died. Not all of these writers are haiku poets, although most of them are, even if they are better known as novelists. Their “death days” have become seasonal words that haiku poets use to write poems commemorating them. These words usually take the form of the writer’s name or some word associated with them plus the character “ki,” （忌) meaning “mourning,” or “the anniversary of someone’s death.”  Shiki’s death day, October 19, is called “Loofah Day,” or “Hechima-ki” after the three deathbed poems he wrote on the loofah gourds hanging outside his sickroom.  My new saijiki tells me that the death day of Shiki’s beloved disciple the novelist and tanka poet Nagatsuka Takashi is called “Takashi-ki.” Takashi died on February 5, 1915 at the age of 35, felled by tuberculosis like Shiki and at almost exactly the same age.  He was 35 and Shiki was 34. Takashi’s only novel, for which Soseki wrote an admiring preface, depicts with gritty but lyrical realism the hard life of farmers in his hometown in Ibaraki Prefecture, northeast of Tokyo.  The title is The Soil, to which the haiku poet Sakai Reiko pays tribute in her poem listed under Takashi’s death day. It’s full of “sh” sounds suggesting incessant spring rains:

the spring rain soaks and seeps

I was happy to see among the little oval photos of writers the face of Okamoto Kanoko, whose work I have translated. “Kanoko-ki” is on February 8th, the day in 1939 when she died of heart failure, just before her fiftieth birthday. Kanoko is known for her passionate love of beauty, her lush descriptive prose, and her work as a scholar of Buddhism. Tanba Noriko captures something of the vivid style in which Kanoko wrote and lived in this poem with no fewer than nine “k”’ sounds:

against a white storehouse wall

I peeked into the winter volume to find Mishima Yukio listed on November 25, the day he disemboweled himself in 1970. Mishima’s day is called, variously, “Mishima-ki,” “Yukio-ki,” or sometimes “Yūkoku-ki,” after his gruesome short story “Patriotism” in which he seems to anticipate his own suicide. I hear the day is celebrated among the ultraright in Japan, who see Mishima as a hero (and prefer that you not mention that he was gay).  To me, Kurokawa Emiko’s poem written for Mishima’s death day might be describing either a hot gay man nodding in recognition while reading  Mishima’s gay-themed novel Confessions of a Mask, or a young thug chanting at a right-wing rally. Or both?

Of course the main purpose of the saijiki is as a reference book for haiku poets to use while composing poems. Having chosen a seasonal word, you look it up and the saijiki tells you all about it. Whether the word in question is a plant, an animal, a weather phenomenon, or  something to do with the doings of human beings, you will find it defined with detailed cultural and scientific information, and followed by a list of poems using the word in chronological order. Having all this in your mind, you are now ready to compose your own poem. But even if you are not composing your own poems, you can easily lose yourself reading the saijiki. It is a treasure trove of natural and human culture, woven together in a conversation that has been going on for more than a millennium.  Entering its world on any page, you follow the links from one word to another and trace the networks and lineages of poems and poets over centuries.

I realized after half an hour standing at our kitchen counter that I could also sit and read, which I did for another half an hour. Anthony laughed when he heard me reading each line out loud, savoring the sounds. Then he came into the kitchen to find me caressing the pages, feeling the heft of the book in my hands.

I mentioned before how, in Fujita Shōshi’s essay, he says his teacher Mizuhara Shūōshi used the word, “shirabe” to describe the rhythm of haiku. I thought immediately of Masago no Shirabe, the title of the local haikai journal in Matsuyama in which Shiki published his earliest poems in the late 1880s. The title means, “the melody of sand,” and I have always wondered where it came from. Googling now, I realize it must be alluding to a passage in the preface to the Kokinshu, the great tenth-century anthology of Japanese poetry, where the editor Ki no Tsurayuki says that Japanese poetry has accumulated over the ages like “myriad grains of sand from the shore, piling into mountains.”  The Saijiki is a living storehouse filled with those grains of sand.