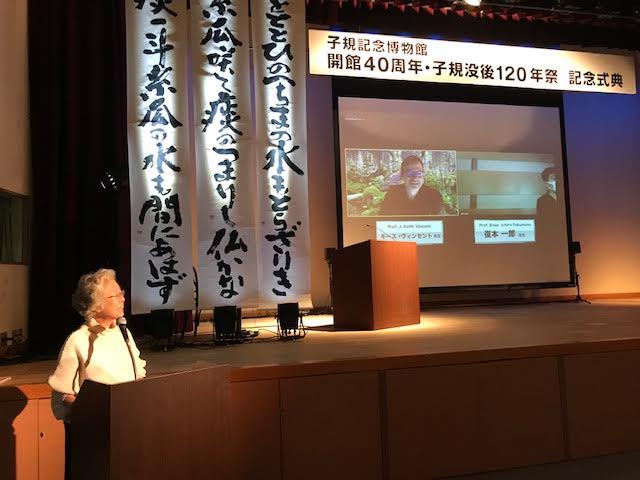 while he chokes to death on phlegm

This is one of three poems which Masaoka Shiki scrawled on sheets of paper he used for painting just before he died at around 2 in the morning on September 19, 1902. Shiki had loofah gourds growing on a trellis outside his window, and the juice of the gourds was used to treat coughing and to clear phlegm for tubercular patients. The word “buddha” in Japanese can also mean a dead body. So in this poem, Shiki looks on his own future corpse with his characteristic attitude of detached amusement, even in his final hour.

Shiki’s death day is known and celebrated every year as “Loofah Day” (“Hechima no ki”) after these poems. By the Japanese count, today is the 120th anniversary of the first “Loofah Day.” It is also the fortieth anniversary of the Shiki Museum in Matsuyama, the largest and surely one of the most active and well run museums devoted to a single literary figure in Japan. The Museum is now closed to the public due to the coronavirus, but I was honored to participate in a virtual event marking these anniversaries. It was held this morning Japan time in the museum’s almost empty auditorium on a stage decorated with large-scale reproductions of Shiki’s three death poems in his iconic handwriting.

After greetings from the mayor of Matsuyama and the governor of Ehime Prefecture, the museum’s charismatic director Takeda Miki delivered a keynote speech in which she spoke of “Shiki’s Achievement” and his energetic entrance into the literary world. She focused on 1892, a year that Shiki would later describe as the one in which his “haiku life” began. It was a year when Shiki wrote over three thousand poems and some of his first theoretical essays on haiku, while developing various exercises for haiku composition such as the “twelve-monther,” a series of twelve poems on a single key word viewed from the seasonal perspective of each month of the year.

Takeda described a number of fascinating texts that Shiki produced in that year. One of these was the Sannin monogatari, [Tale of Three People ] a kind of dialogue in haiku among three imaginary characters that Shiki composed together with the novelist Kōda Rohan. Rohan and Shiki were both just twenty-five years old in 1892. But while Shiki was just starting out, Rohan was already a wildly successful novelist. Rohan had given Shiki a less than glowing review of a novel he had completed earlier that year, but he admired Shiki’s work as a haiku poet and was eager to collaborate with him. The Tale of Three People was published with Rohan’s name on the cover, but Shiki’s friends in Matsuyama were delighted when they recognized two of Shiki’s pen names attached to many of the poems. Shiki deeply admired Rohan, and Takeda pointed out that the thrill of having his own poems recognized in this way by Rohan and having his friends back home witness and appreciate this approval provided him with a huge boost of confidence, what she called a gentaiken, or “foundational experience,” as he set out on his ambitious plan to reinvent and reinvigorate the haiku for the modern era.

Around the same time, the novelist and critic Tsubouchi Shōyo, author of a hugely influential treatise on the novel, began reprinting some of Shiki’s essays on haiku in the prestigious journal Waseda Bungaku. Among these was the famous thirteenth installment of Shiki’s series of “Essays from the Otter’s Den,” in which he warned of the impending demise of the haiku by the end of the Meiji period unless it was injected with new ideas and new diction beyond the classical forms. Shōyō was clearly impressed with Shiki and he agreed to a meeting with the young poet and his friend the future novelist Natsume Sōseki in the fall of 1892. That meeting seems to have cleared the way for Shiki to publish in Waseda Bungaku more and more of the “new haiku” that he and members of his circle had begun to write. In this way, as Takeda-sensei explained, steadily, and step-by-step, Shiki pursued his goal of reinvigorating the haiku and promoting his vision of it as a serious poetic form to be judged by aesthetic standards on par with other forms of Literature. In essence, Shiki’s sought to do with the haiku what Shōyō had done for the novel.

But even as Shiki was experiencing these early successes, he watched with a mixture of surprise and envy as his younger cousin Fujino Kohaku took the literary world by storm, publishing an ambitious play in the pages of Waseda Bungaku at the startlingly young age of twenty three. I’ve been thinking a lot about Kohaku lately and the pivotal role he played in Shiki and Soseki’s lives, so I was fascinated that he figured prominently in Takeda-sensei’s account of “Shiki’s achievement.”  Called by their mutual friend Ioki Hyōtei a “strange genius,” (異様な天才), Kohaku could be an extrovert: cracking up their friends with his spot-on imitation of Shoyo lecturing on Shakespeare and appearing in furisode kimono like a female impersonator in kabuki.  But underneath the jocular exterior he was often depressed and he had a destructive streak that had unnerved Shiki ever since they were boys. The critic Kubota Masfumi has argued that it was largely by rejecting the “Kohaku-like” element in himself that Shiki became who he was. In the spring of 1895, Kohaku fatally shot himself with a pistol, and Shiki was left with a profound case of survivor guilt that, along with own rapidly failing health, would cast a dark, albeit poetically productive, shadow over his late work. (As you may have noticed, there are more than a few echoes between the story of Kohaku and Shiki with the characters Sensei and “K” in Soseki’s novel Kokoro. But that is a topic for another post….)

I thoroughly enjoyed Takeda’s keynote, which I have just barely outlined here. It was an example of compelling, rigorous, and outward-facing scholarship, targeted at the audience of Shiki fans, scholars, and haiku enthusiasts that the museum has spent years cultivating.

Committed to making their extraordinary collection accessible to the public, the museum has long made all 24,000 of Shiki’s haiku available in an online database that I use almost on a daily basis. Now they have begun to digitize their collection of archival materials.

After the keynote, Takeda-sensei officially unveiled an open-access digital version of two important manuscripts in Shiki’s hand. The Najimishū 『なじみ集』[Poems by My Friends] is a collection of over 4,000 poems by Shiki and ninety-eight of his friends and fellow poets. Presumed lost for years, the manuscript turned up at a used bookstore in 2009 and the museum acquired it. Now you can view all of its more than seven hundred pages in high quality scans here on the museum’s website. On the same site you can view a digital version of Take no sato uta  [Songs from the Bamboo Village] a collection of almost two thousand 31-syllable tanka poems by Shiki along with a much smaller number of his poems in other genres.

Next up was a panel discussion among Professor Fukumoto Ichiro,  the haiku poet and teacher Natsui Itsuki, and myself.  Perhaps the greatest living scholar of Shiki’s work, professor Fukumoto has written countless books on Shiki including, most recently, several annotated editions of his major writings that have appeared in convenient paperback bunkobon by Iwanami. Professor Fukumoto began his career as a scholar of Matsuo Basho, and for this event he spoke about the origins of haiku in linked verse sessions that often took place in intimate physical settings with poets “touching knees” and getting to know each other through the process of collective poetic composition. He quoted a lovely hokku by Basho, written at the beginning of one such session with three other poets in 1694:

our hearts come together

on four-and-a half mats

Four people is a lot to fit in a four-and-a-half mat room. Haiku gatherings in Shiki’s house were even more crowded. A famous painting by Shimomura Izan shows one such gathering in which twenty-three poets including Shiki are crammed into an eight-mat room to write and discuss poems together. Writing poems in this collective, intimate fashion has long been a part of haiku composition. But what to do when we are living in a pandemic? These are not situations conducive to “social distancing.”

The next speaker, Natsui Itsuki, spoke about how the haiku world in Japan has adapted to life in a pandemic. A prolific author and well known television personality, Natsui-sensei may be the most influential teacher of haiku in Japan today. Before COVID she traveled all over the country leading workshops in haiku composition.  When the lockdowns began, those trips were no longer possible, and indeed the whole world of haiku composition seemed about to grind to a halt. But soon they were able to adapt, partly by drawing on a long history of holding haiku gatherings remotely using the mail, fax, or email.  One of the poets in her group developed an online platform called the Natsugumo System that makes it easy to share and comment on poems online in a way that mimics the system of collective, anonymous critique that Shiki was one of the first to develop.  Natsui also started a bi-weekly program on Youtube where she teaches the fundamentals of haiku and comments on poems for hundreds of participants, many of whom carry on lively side conversations on the chat. As Natsui noted, Shiki himself was a pioneer of the modern media of his own day and he would no doubt have been the first to adapt technologies like this were he alive today.

They asked me to speak about haiku in the US during corona, so I said a few words about a wonderful collection edited by Mark Nowak and written by a group of taxi drivers, nannies, subway drivers, and restaurant workers in New York who used haiku to share their experiences of the pandemic in New York.  I also offered a few thoughts about how the haiku form is well suited to help us cope in a pandemic.

You can see the whole event here on you tube.

It was an honor for me to be able to participate. I was sad not to be able to be there in person, but even at such a distance, it was inspiring and profoundly moving to see how much the people of Matsuyama value and care for Shiki’s legacy. And I was glad to have the chance to chat, however briefly, with Fukumoto sensei, who tells me that his long-awaited new biography of Shiki will be out from Iwanami this December. And I was delighted to meet Natsui sensei and be on the virtual stage with her. It was a book of hers, 365 Days of Shiki that inspired me to do my own year of commentary on Shiki poems on Facebook a few years ago.

I wrote my talk in English and my good friend Nanae Tamura translated it into Japanese. For that, and for her work as a liaison with the Shiki Museum for me, I am extremely grateful.