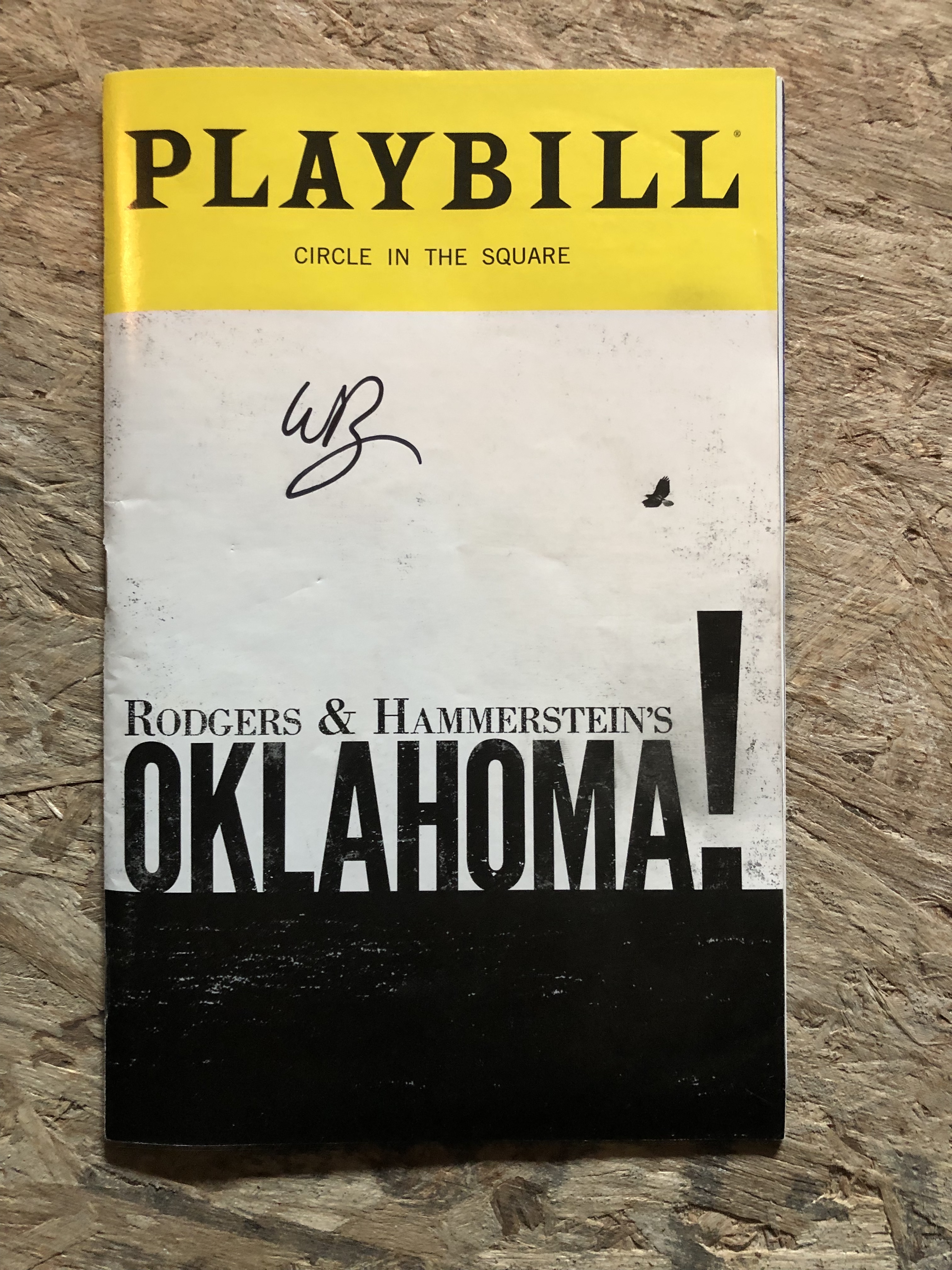 For my 51st birthday Anthony took me to see Daniel Fish’s production of Oklahoma! I knew it was supposed to be brilliant, but I had also read that the script was basically unchanged, and having recently rewatched the film version, I was having trouble imagining how it could get beyond the saccharine of the original. Plus I was horribly jetlagged, having just gotten back from Japan, and worried I would nod off. But then the show started, and I found it profoundly upsetting and moving in ways that I will be processing for a long time.

I’ve been reading a lot about the history of  my home state lately. Almost everyone who writes about Oklahoma remarks on how it is somehow hard to place regionally: not the south, not the Midwest, and not Texas. The playwright George Milburn wrote in 1943, three years after the Rogers & Hammerstein musical premiered, “When I visit such distant Babylons as New York, or London, I have learned to go braced for people, well informed or otherwise, who have only the vaguest notions of what Oklahoma (without the exclamation point) is, much less any idea where it is.” Milburn says outsiders often confuse the state with “a new nervous disorder, or a patent breakfast food, or a Japanese seaport…”[1] but even some of us who grew up there can have trouble placing it. I share the sense described by the writer Rilla Askew, of having grown up in a place that felt like “a black hole in the center of the country, a literal and figurative no-man’s land”[2] and I remember desperately wanting to go somewhere where they had “culture,” which is how I ended up in Japan at seventeen. My fellow Oklahoman Michael Moon speculated in a 1997 article that this sense of Oklahoma as a black hole was the result of the state having been the site of so much trauma that the nation would rather forget: the Trail of Tears, the Tulsa Race Massacre of 1921, the Osage murders, the Oklahoma City bombing.[3] The musical Oklahoma! with its soaring American optimism has facilitated that forgetting.  It includes not a single native American character, and celebrates a “Brand New State!” as if nothing (not to mention anything bad) had ever happened there. And yet, if you listen closely, as Fish’s production does, it’s all in there. And you can’t help but come away from the show with a profound sense of how, as Askew writes, in her book Most American: Essays from a Wounded Place, “Oklahoma is America: we are its microcosm; our story is America’s story, intensified to the hundredth power.”

The show is staged “in the round,” and Anthony and I sat at one of the card tables bearing crock pots of chili to be served at intermission. Sitting directly across from us as the show started was the actor playing the “Persian Peddler” Ali Hakim, the role I played in high school in 1984. As we watched the show, memories of growing up gay in Oklahoma mixed with memories of our blond Lorie and the hunk who played Curly. I don’t remember having any critical thoughts about the show at the time. The course in Oklahoma history in my mostly white suburban high school was a joke, despite the school being wealthy enough to hire a full orchestra for the show. But I will never forget my classmate who played Ado Annie putting her tongue in my mouth during our onstage kiss. Until this morning, reading Frank Rich’s amazingly well researched review of the show, I had forgotten having read in Michael Moon’s essay back in 1997 that the musical is based on a play by Lynn Riggs, a gay Oklahoman born in 1899 to a Cherokee mother, who left the state as a young man and never returned. Riggs continued to write about Oklahoma for his whole life, while hobnobbing with Bette Davis. His biography, which I’m going to read now, is called Haunted by Home.

[1] George Milburn, “Oklahoma”reprinted in An Oklahoma I Had Never Seen Before: Alternative Views of Oklahoma History, edited by Davis D. Joyce. University of Oklahoma Press, 1994. 3-14.

[2] Rilla Askew, Most American: Notes from a Wounded Place. University of Oklahoma Press, 2017.