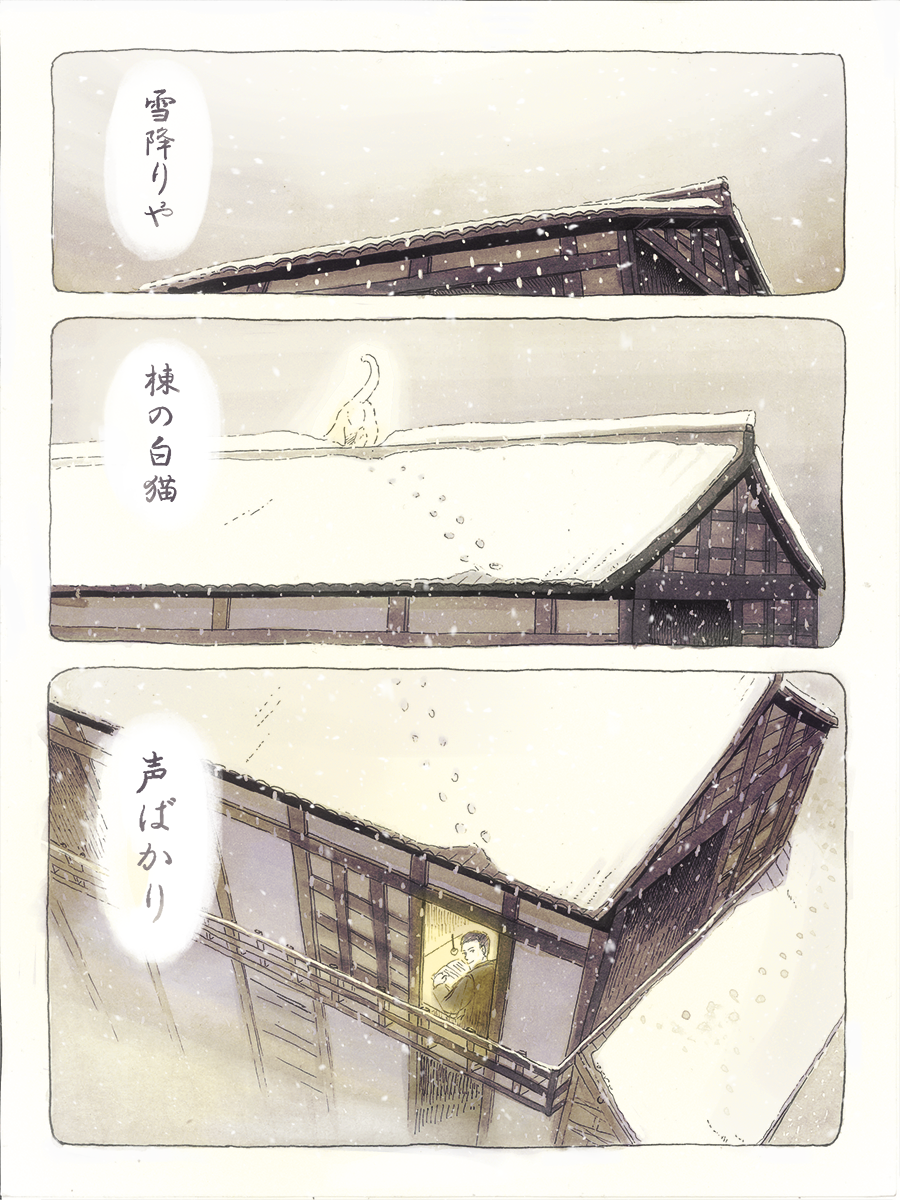 the snow is falling

and a white cat on the roof

is heard but not seen

This is the first haiku that Masaoka Shiki wrote. He was seventeen years old and had been living in Tokyo for two years. He included it at the end of a letter dated January 8, 1885, sent from Tokyo to a friend in his hometown, the city of Matsuyama, 414 miles to the southwest. The letter’s recipient, Takemura Kōtō (1865-1901), would move to Tokyo himself in April of that same year, as would many of their classmates from Matsuyama, joining the waves of ambitious young people who flocked to the capital for an education and a chance at success in the government or in Japan’s rapidly expanding industrial economy.

In those years, a knowledge of classical Chinese poetry and the Confucian classics was considered indispensable for the Japanese male elite. Shiki had studied Chinese since the age of seven with his maternal uncle Ōhara Kanzan, a prominent Confucian scholar. He and several friends, including Takemura, formed a group devoted to studying Chinese, calling themselves “The Five Friends,” a name derived from a Chinese literary source. [2] Since moving to Tokyo, Shiki had continued to correspond with the members of this group, and as one of the “Five Friends,” Takemura would have been expecting to receive a few poems in Chinese from Shiki, not a lowly haiku. [3]

As Shiki explains to Takemura in the letter, he had every intention to make use of his winter vacation to compose new poems in Chinese. But life in Tokyo has kept him too busy to write the poems and repay what he playfully calls the “poetic debt” (shisai) owed to his friend back in Matsuyama. The end of the year being the time traditionally when all debts were to be paid, Shiki spins an elaborate excuse, describing himself on the last night of the year as he lay beneath his futon with bated breath, terrified that the “poetic debt collector” would come knocking at any moment and demand that he produce the poems owed. But when the sky glowed crimson with no visit from the collector, he let out a sigh of relief, telling himself that folks in Matsuyama must still be following the old lunar calendar. The gap between the two calendars had left him a few weeks of reprieve. [4]

The letter continues with Shiki telling Takemura how he returned home the next day, worn out from making the obligatory New Year’s visits to friends in Tokyo, only to develop an eye infection. At first he thinks nothing of it. But then comes a stream of yellow pus which he keeps wiping away, “like pumping out a sewage tank.” His swollen eyes make it impossible for him to read the rhyming dictionary that he needs to compose a proper poem in Chinese.[5] Meanwhile, he is forced to rely on his ears rather than his eyes to appreciate what is happening in the neighborhood around him: children’s laughing voices; the sounds of kites flapping in the air above; someone playing shuttlecock outside his window. When the rare visitor drops by, Shiki tries to see who it is, but his eyes are so swollen that he may as well be a “blind man spying through a fence.”

By the next day, Shiki’s eyes have improved enough for him to step out for a New Year’s haircut. It has snowed almost two feet since the morning, and he walks home through a “silver world” that is like nothing he has ever seen back home in Matsuyama, where the climate was much warmer. The red bricks of modern Tokyo against the bright white of the snow are worthy of a poem in Chinese. But Shiki decides to “put away the heavy artillery” in exchange for the “short sword,” of haiku. The letter closes with the poem above, the first of more than 24,000 haiku that Shiki would write over the course of his short life.

Once Takemura came upon these seventeen syllables at the end of the letter, he would have been primed to picture to himself the comical sight of his friend walking through the snow being startled by the yowling of a cat somewhere on a rooftop above him, squinting pathetically through his swollen, pus-filled eyes in search of this white creature on a white background.

Read in the context of the letter in which it appears, this first haiku encapsulates many of the themes that will preoccupy Shiki throughout  his life. Here already we see his characteristically frank treatment of his own body and bodily fluids. The scene of Shiki straining to listen to the sounds in the street outside is a preview of what he will experience in the last seven years of his life, when a much more serious illness will keep him confined to his sick room, making poetry out of everything that enters his limited field of vision. Finally, the letter shows how trivial the genre of haiku seemed to Shiki at this time when compared to the “heavy artillery” of Chinese poetry. It was so for most young men of his day. And yet in calling haiku metaphorically a “short sword,” Shiki delivers a sly compliment to the genre: a “short sword” (suntetsu in Japanese) can also mean a pithy phrase that owes its effect to its brevity.

In the last line of the letter following this first haiku, Shiki writes: “Chinese poems to follow in a few days.”

Illustration above by Rebekah Machemer, whose work can be seen here.

[2] The source was an essay by the Ming-period Confucian statesman and philiosopher Xue Xuan (1389-1464) extolling the character of five noble plants that were thought to bring out each other’s virtues: these “five friends” were the bamboo, plum. orchid, chrysanthemum, and lotus.

[4] Japan had officially adopted the Gregorian calendar in 1873 but implementation was spotty in areas outside of Tokyo. Stefan Tanaka writes, “Indeed, the lunar calendar was commonly used in rural Japan up through World War II. According to a 1946 survey in which respondents were asked which new year they commemorated, in rural regions 36.7 percent followed the lunar and 48.8 percent followed some combination of the two, while 93 percent of those in urban areas used the solar new year.” Stefan Tanaka, New Times in Modern Japan (Princeton, NJ: Princeton University Press, 2004). Tanaka takest his data from Yoshiro Okada, Meiji Kaireki: “toki” No Bunmei Kaika (Tokyo: Daishukan shoten, 1994). The shift to the Gregorian calendar had a profound effect on every aspect of life in Japan, not least on the composition of poetry, which was intimately tied to the seasons.

[5] Since the pronunciation of characters is different in the two languages, Japanese poets relied on such dictionaries in order to ensure that their poems rhymed in Chinese.