An index of Shiki haiku 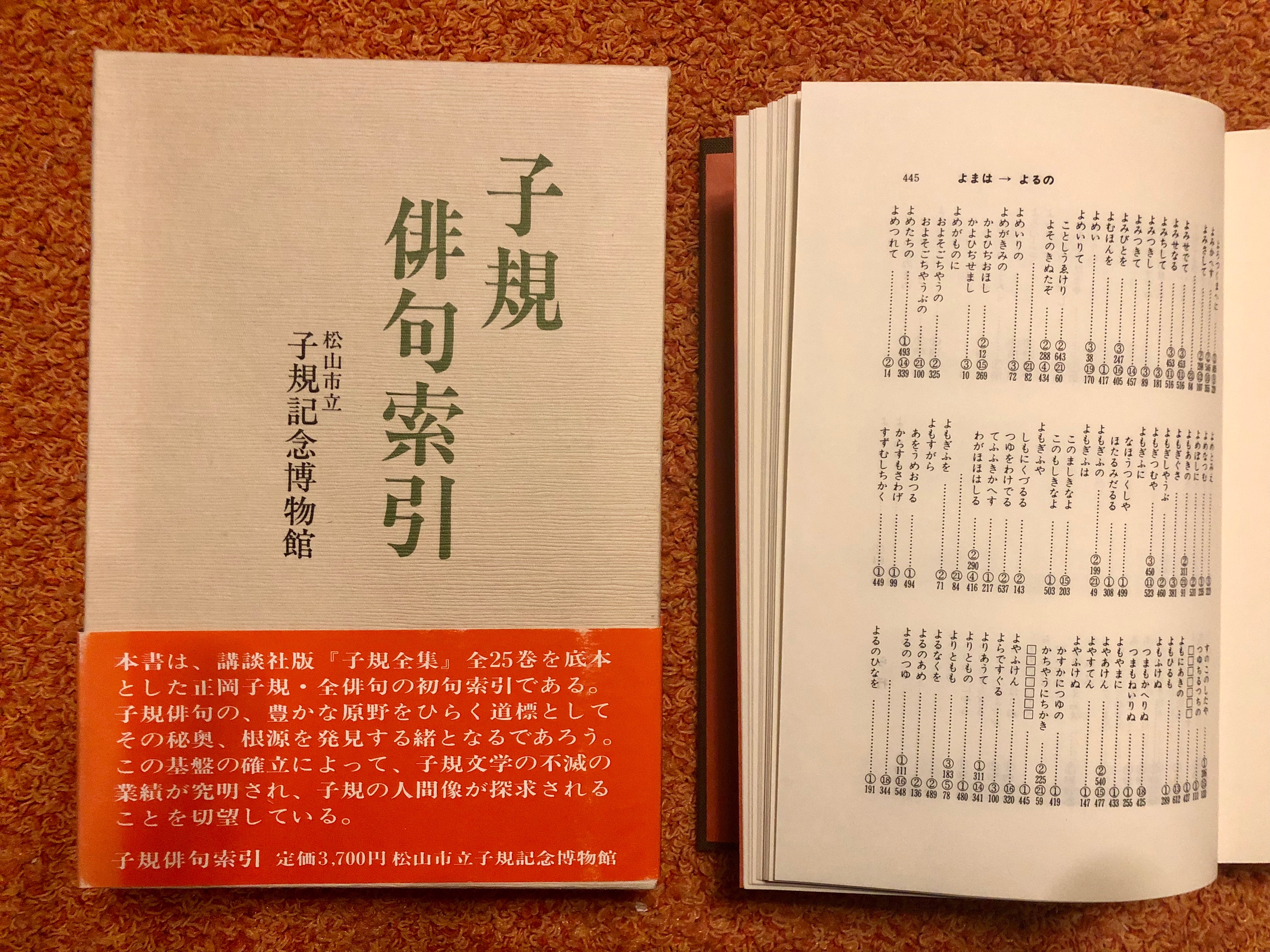 As I work on a biography of Masaoka Shiki these days, I’m feeling very grateful to my friend Nanae Tamura for recommending that I buy this book at the Shiki Memorial Museum in Matsuyama last year. It’s an index of all of the haiku that appear in the standard edition of The Collected Works of Shiki [Shiki zenshū] published by Kōdansha in the late 1970s. Previously I had no other way of properly citing a haiku by Shiki than by combing through the first three volumes of the collection where they are listed by year of composition and by season. Since he wrote many thousands of haiku in some years, this could be quite time consuming, so the index comes in very handy.

It is also quite moving to think about all the labor that went into compiling the index, and what that says about how much Shiki has meant to his readers. Professor Wada Katsuji did this labor together with more than forty of his students and alumni of Osaka Seikei Junior College in 1983. Wada and his students used a total of  39,325 cards to capture where each haiku appeared throughout the collection. This makes it possible easily to see the textual history of an individual haiku; how for example, Shiki may have written it first to include in a letter, then copied it out into one of his many notebooks, and finally published it in a newspaper or an anthology.

Wada’s father Professor Wada Shigeki, then director of the Shiki Museum, describes the method used to compile the index in the afterword to the volume. It involved attaching cards listing info on each haiku to the individual pages where they appear, cut out from the Collected Works. They used two sets of the collection for this purpose, to capture both sides of each page, and Wada writes of how forlorn their mutilated remains appeared after the process was complete. Hara Printing (原印刷株式会社) in the city of Imabari, next door to Matsuyama then fed the data into a computer (one wonders what model it was in 1983) in what Wada describes as “a conversation and a battle between man and machine (479).” The whole process took almost a year, passing through all four seasons.

As Wada points out, it is extraordinary to think that the work of one very sick man should require the aid of a computer to encompass. Throughout the index project, Wada writes, the team was inspired by the example of Shiki’s own database of poems, the massive “Haiku Bunrui,” in which he transcribed and categorized over 120,000 poems all by hand, copying them out of crumbling collections of haikai from the Edo period and earlier. Wada writes that the Index of Shiki Haiku was the first, and perhaps the last example of a hybrid effort between humans and computers; it was already clear in 1983 that the day was coming when human labor would be premised from the start on what the computer could do. Shiki would have been fascinated.

The finished Index contains a total of 25,444 poems. This is 1,797 more than the number listed in the collected works, because the index also includes variant versions, drafts, and crossed-out poems.

This volume is in fact not the first index of Shiki haiku. There was an earlier one:  compiled at Ehime University in Matsuyama in 1964 and based on the first collected works, which was published by Kaizōsha in 1934.  It included all 18,056 haiku that appeared in that collection, listed separately by all three lines. This project took twenty students three years to complete, and proved very useful for the editors who compiled the new Kōdansha collected works in the next decade. In his preface to the index, Wada Shigeki notes that the founding of the Shiki Memorial Museum in Matsuyama in 1981 had a lot to do with the momentum created by the publication of the Kōdansha collected works, to which many scholars from Matsuyama contributed, most notably Wada himself, who was the museum’s first director. Although the index was published by the museum, Kōdansha gave permission to use the same cover design as the zenshū. In more recent years, the museum has put all of Shiki’s haiku online in this database. The database is great for key word searches, but it lists the poems only by year, season, and seasonal word. If you want to cite them or know their publication history you still need the paper index.

Having both this index and the database is of course a great aid to research. But now that all their work is done, I admit to feeling a little envious of the people who got to spend so much time immersed in Shiki’s haiku as they compiled them. Wada talks about how much they learned from the process. He cites as one example how many obscure terms from the Chinese classic The Water Margin show up in Shiki’s haiku, indicating the depth of his knowledge of that work.

The poems in the Index of Shiki Haiku are listed by first line, with the second added for those poems that have identical first lines. Most first lines have five syllables. Some have fewer (ji-tarazu) and some have more (ji-amari) and they are listed as such.  An example of the former that Wada cites is this famous poem:

do I have to live?

The first line consists only of the word “yomei,” meaning “remaining life.” The shortness of this line, like the “short night” in the last, suggests how little time Shiki had left. I had not previously noticed that the first line of this poem has only three syllables. But when you see it listed among others in the index (see image above), it stands out on the page. The Index tells us that you can find this poem in The Collected Works of Shiki volume 3, page 38. This is the third of those three volumes listing Shiki’s haiku chronologically. But it also appears in  volume 19, p. 170, at the end of a long letter of June 26, 1897 to Natsume Sōseki, who was living in Kumamoto at the time.  Shiki follows it with one more haiku to close the letter:

For a break from this disease

I look at roses